Several #BCHampions attended the PRSA Landmarks of Excellence awards program at the PNC Club at Cardinal Stadium, where BCH won a total of 19 awards–including five Awards of Excellence, which are reserved for those projects earning the highest level of scores.

The Landmarks Awards are hosted by the Public Relations Society of America’s Bluegrass chapter to recognize this region’s top public relations work and communications projects over the past year. Agencies and companies across the region enter their work which is then judged by a peer review committee of public relations professionals in other cities. 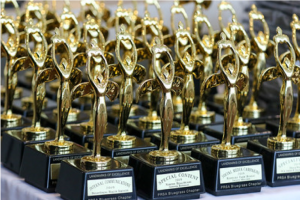 Here are  BCH’s awards in their respective categories:

We value our clients and appreciate the opportunity to partner with them to create award-winning work.

Get updates from BCH.